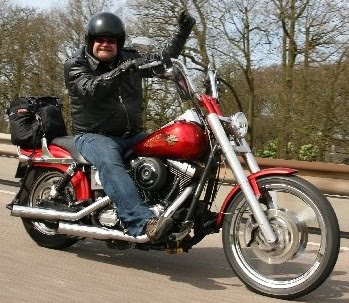 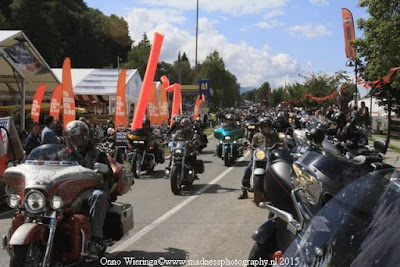 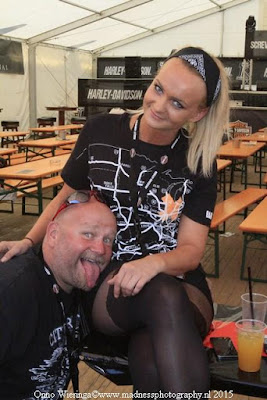 So many people, so many opninions. Even if you like something so much, it’s always nice to get a confirmation. And when you do meet somebody who visits all the major Hot Rod and Rockabilly Events around Europe, from Sweden to England and that person tells you right away; “When someone asks me which event is the best, I always answer: RockabillyDay in Belgium!” you know you’re right. 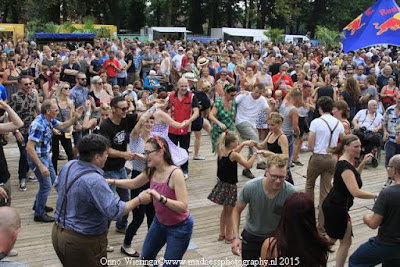 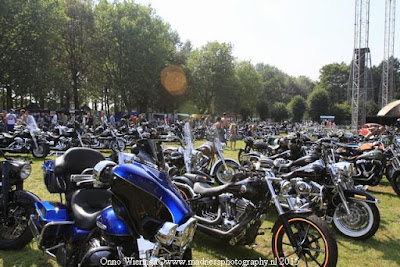 We’re visiting RockabillyDay in Belgium, held in a new location in Doornzele, nearby Gent. We meet John Hoekendijk, accompanied by his two sons, just like their dad real Hot Rod and H-D fanatics. “Yes, really, we’ve been to the biggest and most well known events and shows, but  RockabillyDay is the best and friendliest, everybody is in a very relaxt mood and RD just has everything you want to hear and see on an event like this,” sons Bart and ‘little’ John nod in approvement. 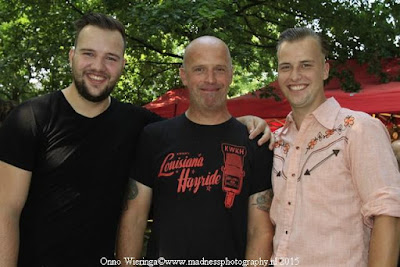 John Hookendijk and his sons

The new location is even better than the previous one, where RD was more spread out on different fields. When you enter RD, situated in a park, you’ll first see the bikes and then the Wall of Death, ‘Sala Motodrome’ owned by Jan Laurens behind the bikes. Next you’ll see hundreds of the coolste custom cars to be found in Belgium, England, The Netherlands, Germany and France. Walking past the car area, there’s the main stage, food & drinks, many stalls and the famous ‘Pomadeshop’. Both lanes parallel to the main field were used as 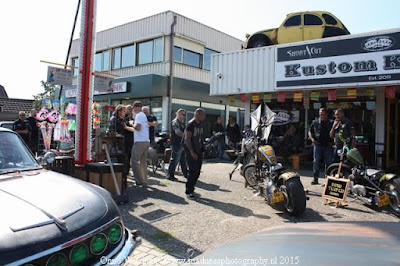 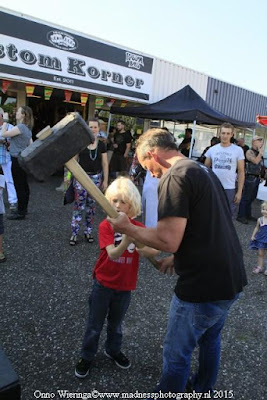 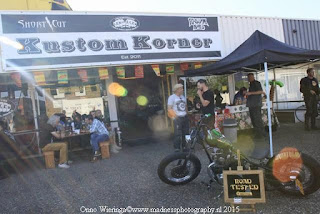 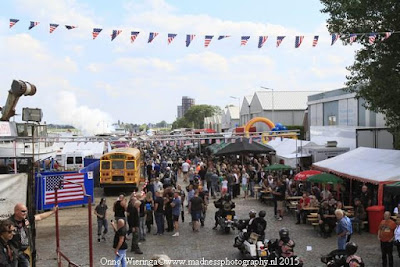 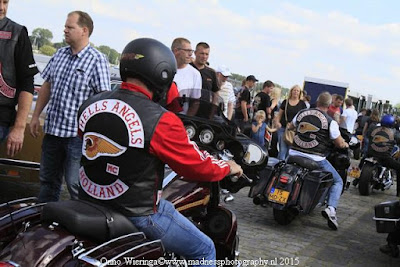 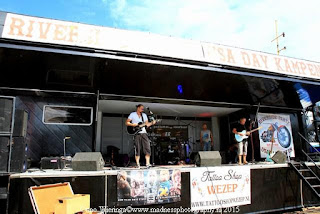 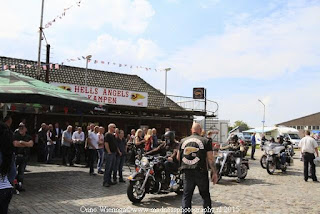 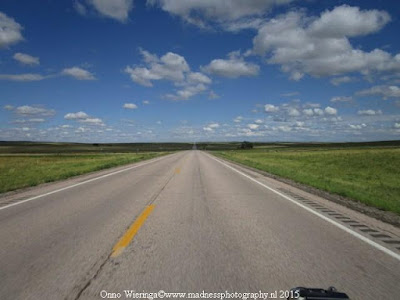 Adventure, The Open Road.
Thousends of miles to be ridden.
We did it again. One of our most memorable Road Trips ever.

Me and my buddy G-Rat on our bikes, A Cross Bones with TimeOut Trailer and a Fat Bob.
We started of in South Dakota for Sturgis Bike Week. Riding in the Black Hills, seeing beautiful South Dakota. heading fro Iowa, with many detours. Visiting friends along the way, like Klock Werks in Mitchell, where we went to see the Corn Palace and Prehistoric Indian Village too. Through Nebraska with it's wide open country. Crossing Iowa with in the middle of the millions and millions of acres of corn the National Motorcycle Museum in Anamosa. Crossing big rivers like the Missouri, riding endless roads in the sun,
from one gas station to the next.
Here's a small compilation of the Road Trip as we experienced it.
(photo's by Onno and G-Rat) 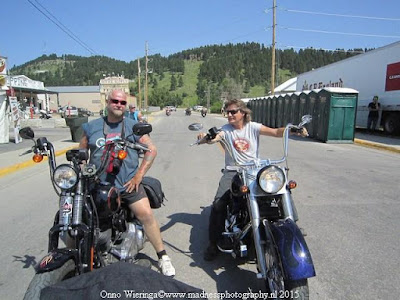 Me and good friend Richie, riding in Sturgis 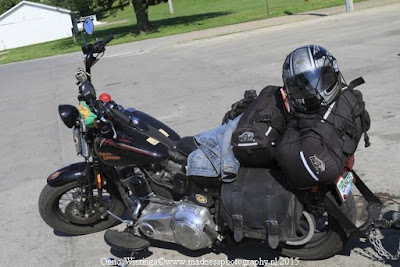 Packed up and ready to leave Sturgis.
And Yes, I did carry a lot of shit... 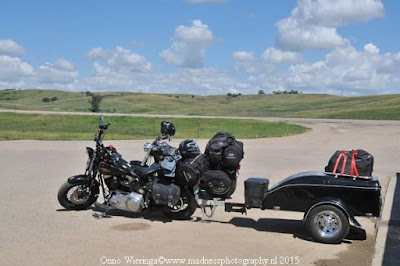 The usual stuff for being On The Road for a long time is on the bike,
Read more »
Posted by Onno "Berserk" Wieringa www.madnessphotography.nl at Monday, November 02, 2015 No comments:

It was the 12th Annual Car Show,
held in Springville, just a bit north of Cedar Springs.
And yes, it was hot with temperatures in the high 90's!
Still, many cars showed up and the St. Isidore Parish parkinglot
and the surrounding grass fields were soon filled with beautiful American cars. 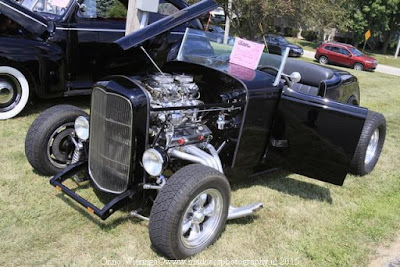 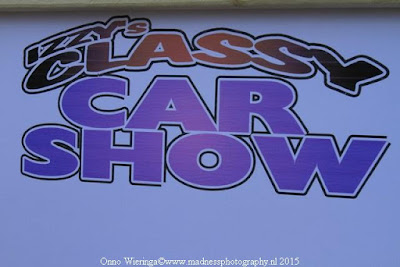 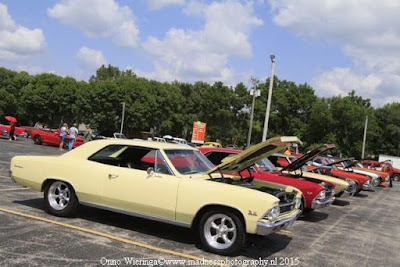 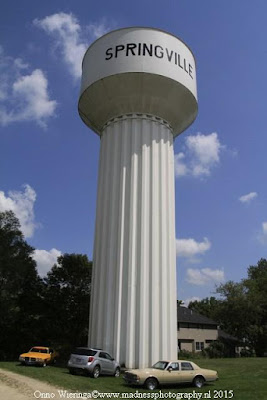 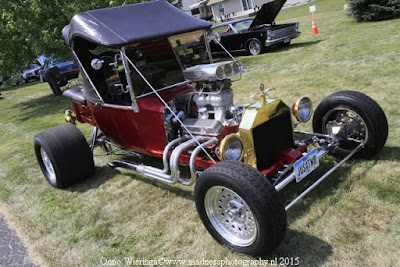 Shining with perfect paint, sparkling chrome, custom wheels, the cars and trucks waited to be judged. I guess about a hundred or more cars competed for prizes in as many classes, so it seemed. The Bike Class was disapointing, with just a few entries.
But one of them is sure worth mentioning, the Cushman model Eagle with a rare side car. The
Read more »
Posted by Onno "Berserk" Wieringa www.madnessphotography.nl at Sunday, November 01, 2015 No comments:

A visit to the Prehistoric Indian Village in Mitchell, SD 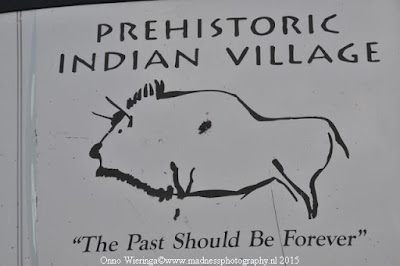 The Village is the only archaeological site in South Dakota that is open to the public. It was discovered in 1910 by a student from Dakota Wesleyan University. The Mitchell Prehistoric Indian Village Preservation Society was formed in 1975 to preserve the site. "Our mission statement is to promote an understanding of the first people to inhabit in this region by developing, preserving and exhibiting a significant collection and archaeological site; by taking a leadership role in research and scholarship; by engaging and providing access for audiences from all nations; and by delivering innovative programs of benefit to the general public and community." 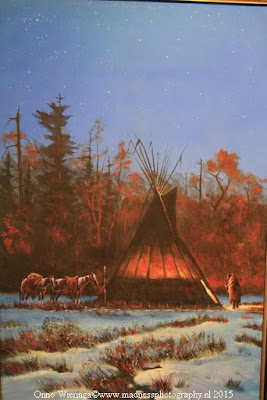 We were invited to the Prehistoric Indian Village and Kate, student and working at the Indian Village, gave us a tour and told us so many interesting facts. History is very imporant and when we, as Europeans, ride through the Mid-West and experience the enormous space, the freedom of the open prairies, we've often wondered about how the Indians must have lived. We feel honoured that we are invited and join the Klock Werks crew. This is a great opportunity to see how people lived like in the past. 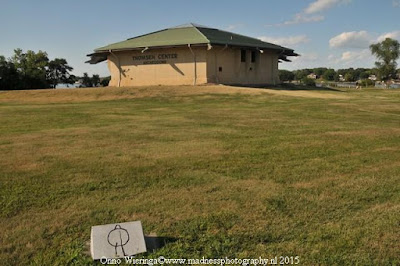 The Prehistoric Indian Village in Mitchell, SD
is covered to protect the excavations

Students from the University of Exeter, Exeter, England come each summer for our annual Summer Archaeology Field School to continue excavations of the site.  "Over the years we have learned much about the people who lived here 1,100 years ago.  We have learned that this site was a major bison processing center, our people were processing bison on an industrial scale to extract bone grease for the manufacture of pemmican.  We also know that these people were skilled farmers, growing crops such as corn, beans, squashes, sunflower, tobacco and amaranth."

The people who lived here lived in earthen lodges (teepees are a 'modern' convenience - it was after the introduction of horses that made it possible for the nomadic tribes to live in teepees) that were built on a bluff overlooking what was then a creek; the creek was dammed in 1928 to create Lake Mitchell.  There are 70 to 80 lodges buried on our grounds.